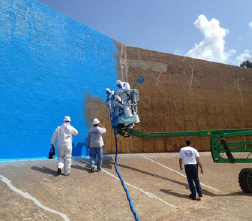 (as published in WATERPROOF! magazine, Fall 2014)

The list of materials used as waterproof coatings through the ages is lengthy.  For centuries, asphalt-based products such as pitch and tar were the only choice. In the 20th Century, a range of other options developed, including paint, epoxy, fiberglass and vinyl esters.

The latest coating technology is polyurea. Developed in the late 1980s for the automotive industry, this material is now used in a wide array of applications. Use of this material as industrial waterproofing has skyrocketed in popularity in the past decade due to its fast-curing, corrosion- and abrasion-resistant characteristics.

Andy Phelan, director of business development and training at Rhino Linings Corporation, explains, Polyurea was invented in the early 1980s when a less moisture-sensitive form of polyurethane was desired. By replacing the hydroxyl group in the urethane with an amine group, a product we now call polyurea was formed.Â  It has significantly less sensitivity to moisture than other urethane-based coatings.

Of the two most common types of polyureas, aromatic polyureas are by far the most common. Phelan calls them â€œthe workhorse of the industry offering a wide variety of physical characteristics for various uses. In fact, about the only characteristic these coatings do not provide is UV stability.

One reason poly coatings are exploding in popularity is the wide variety of positive attributes they exhibit.

The industry website, polyurea.com, opens with a bold statement. “Virtually no other coating can compare to polyurea when it comes to attainable physical properties,” it reads. “Polyureas can be formulated to achieve a tremendous range of properties from high elongation to superior tensile strength to hard or soft, all based on how the materials is formulated and correctly applied.”

It adheres tenaciously to a variety of different substrates (concrete, metals, wood and more) without primers and in a wide range of temperature and humidity environments. Perhaps its greatest advantage is that it sets up extremely quickly, allowing the applicator to build up a finished thickness in a single pass. This allows the owner to put the facility back in service many times faster than traditional coatings, saving days or even weeks of revenue lost to down-time.
Phelan says, “Thicknesses can range from 20 mils to 500 mils in one application.  Cure times range from instantaneous to two minutes allowing for quick return to service.”

As a fast curing, thick film coating, polyurea is a logical solution when seamless, durable membranes are needed for waterproofing.  Additional characteristics such as slip-resistant additives and surface textures can also be incorporated. It can be colored, and is even available in a potable-water-approved formulation.
With such a wide range of performance characteristics, the range of suitable applications is also broad. Tank linings, secondary containment and bridge coatings are some of the most popular uses, but the application possibilities are endless.

The technology has been used successfully on pedestrian decks and parking garages, reservoirs, tunnels, water tanks, slurry pits, and flooring. It can also be used as a joint filler/caulk.

Polyurea was originally used as a truck bed liner to form a permanent watertight layer. The same durable and abrasive-resistant characteristics that make it perfect for lining pickup beds and dump trucks make it attractive for difficult waterproofing projects.

The tanks at wastewater treatment plants, for example, are exposed to turbulence, erosion, and large amounts of hydrogen sulfide gas as the contents are screened, mixed, and dewatered.

A poly coating can supply the abrasion, chemical, and impact resistance needed, and restore the plant to operating condition faster than many other competing systems.

For bridges and other applications exposed to vibrations and movement, the inherent flexibility of polyurea is an added benefit over thinner, less flexible coatings like epoxy.

Polyurea does have a few drawbacks. Phelan notes that the equipment required to apply polyurea coatings can be expensive. It can range from $15,000 to $50,000 or more.  Fully equipped mobile platforms can cost more than $100,000.

The material also costs more than some alternatives. Phelan says initial costs are higher than epoxies, but since a poly coating can last three to five times longer, it becomes quite cost effective over the life of the coating.

As with any waterproofing material, it can fail if applied improperly. Surface preparation —usually sandblasting or priming—is crucial for a successful application.  Most failed poly coating projects have little to do with the polyurea itself, but rather, inadequate or poorly implemented surface preparation.

Most polyureas used for waterproofing are spray-applied with plural component spray equipment.

It’s typically shipped as a two-part system, with the amine resin blend and isocyanate material supplied in 55-gallon drum sets. Once in use on the jobsite, they are transferred from 55-gallon drums to separate tanks in the spray equipment where they are heated to the appropriate temperature (140°F-160°F). The machine then delivers the isocyanate and polyol resin through heated hoses to the spray gun in a precise ratio (usually 1:1).

Polyurea has a set time that is measured in seconds, so it’s crucial that the chemicals don’t mix until the instant before they leave the gun. Otherwise, the material will set up and harden inside the gun.

Several manufacturers sell mobile spray rigs that include all of the tools and equipment needed, mounted on either a trailer or truck bed. 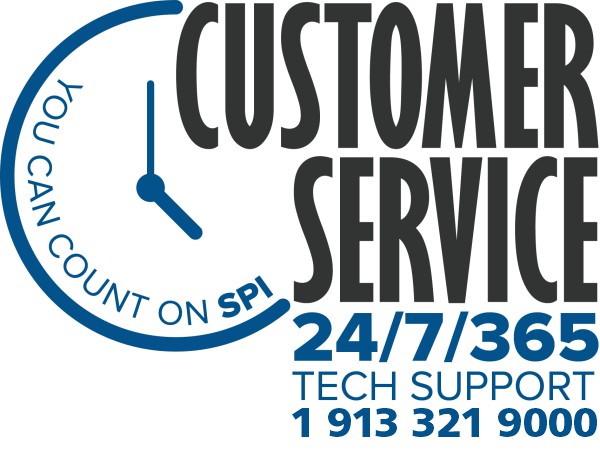